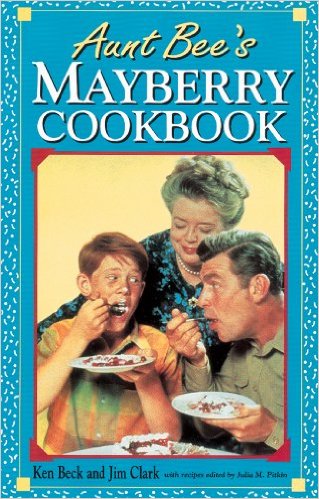 Aunt Bee and her friends have stirred up a cookbook that brings home all the flavor of “The Andy Griffith Show’s” Mayberry. You’ll enjoy most of the 300 mouth-watering recipes (but not all?included is the recipe for Kerosene Cucumbers) for the foods served by Aunt Bee and others in Mayberry.

From good old-fashioned, down-home cooking to some of Mayberry’s more unusual meals, you’ll discover favorite Mayberry-style dishes for all occasions?inspired by Aunt Bee’s unsurpassed talents in the kitchen and her special love for her family and friends.

Aunt Bee’s Mayberry Cookbook is also chock-full of wonderful, rare photographs from “The Andy Griffith Show” and offers entertaining glimpses into “the friendly town.” Many of the recipes are favorites from members of the show’s cast and crew.

What I Loved: First of all, being an Andy Griffith fan, I was already in love with the idea behind this cookbook. But the execution of it only endears it even more to my heart.
Along with a collection of recipes, you’ll find pictures from the show and excerpts from the script. The titles of the recipes are uniquely named to give every fan the best experience possible. The titles alone bring back memories of favorite episodes.

Rating and Recommendation: I’m giving this one 5 stars and highly recommend it for anyone who loves to cook and is a fan of the show.