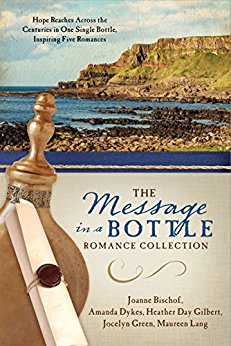 Five historical romances inspired by a messaged passed down through time.

Join the journey as one word etched in Latin on an ancient bronze bottle travels through the centuries to reach five young women who are struggling to maintain their faith in God and love. An Irish princess, a Scottish story weaver, a Post-Colonial nurse, a cotton mill worker, and a maid who nearly drowned each receive a message from the bottle just when they need their hope restored. But will the bottle also bring them each to a man whose love will endure?

The Distant Tide by Heather Day Gilbert
1170: County Kerry, Ireland
When a Viking bent on revenge mistakenly raids the castle of a bookish Irish princess, will she cast her fears aside to befriend the enemy, finally realizing God’s plan for her life?

A Song in the Nightby Amanda
1717: Scotland and England
When a Scottish story-weaver loses her family in a clan war, she finds herself aided by a handsome, secretive bagpiper in a race against time to reunite with someone she never dared hope she’d see again.

The Forgotten Hope by Maureen Lang
1798: New York
As a champion of the sick, a young New Yorker never doubted her worth until a new doctor arrives to work with her father, one who believes her to be nothing more than a social butterfly. Can she gain his respect—and his love?

A River Between Us by Jocelyn Green
1864: Roswell, Georgia
When a Georgian cotton mill worker is arrested and sent North, the Union officer who tries to protect her is the last person she wants to forgive—and the only man who can bring hope and healing to her heart.

The Swelling Sea by Joanne Bischof
1890: Coronado Island, California
After washing ashore on the California coastline, a young woman’s yearning to discover her past leads her to the courageous oarsman who helps her find the key.

My Thoughts: A timeless message of Hope reaches five couples in their time of need. At first, I was a bit skeptical about how a message, on paper, would survive for so long or how those who came later would read it. I thought it would be one of those stories where I would need to ignore logic in order to enjoy the stories, but I was pleasantly surprised. While the bottle carried messages from time to time, the message wasn’t written inside so much as it was outside. Hope was written on the outside for all to see and understand. But whether or not they would accept it…that’s another story.
And speaking of stories, you’re in for a treat with this collection. All five stories are set in vastly different eras, making this one of my favorite collections. The Message in a Bottle collection gets 5 stars from me. Here are my thoughts on the individual novellas.

The Distant Tide: The set kicks off with Gilbert and her Viking tale. This was my first Viking story, but I can promise you it won’t be my last. She really wet my appetite for this gripping era. Although, I was in a new territory with new customs, I didn’t have any problems understanding the story and I enjoyed every minute of it.

A Song in the Night: This was certainly a favorite of mine. Again, I found myself in a new land and era. I really enjoyed a look at the different customs. And I couldn’t get enough of this couple and their dangerous journey.

The Forgotten Hope: While I struggled a bit with connecting with characters and setting, I still found the story to be entertaining. The setting didn’t leap off the page as authentic, but I thought it was an interesting plot and it ended on a strong note for me.

A River Between Us: My heart was overflowing by the time I made it to the Civil War era story. It was everything I wanted in a single novella and then some. This was a story that I couldn’t put down. I loved watching these two enemies become lovers. And as always, Green’s settings are so realistic.

The Swelling Sea: What a solid ending to a great set! Joanne has a way of endearing the characters to the reader and this was certainly one of those times. Parts of the story moved a little slower for me, but I still found myself enjoying it overall. And I was treated to a very happy ending.

~I received a copy from the publisher. I was not required to give a favorable review. All thoughts are my own.

3 thoughts on “Book Review: Message in a Bottle Novella Set”