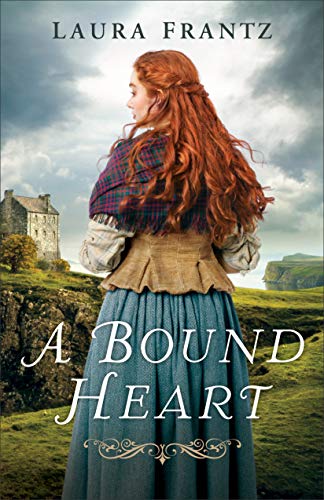 Though Magnus MacLeish and Lark MacDougall grew up on the same castle grounds, Magnus is now laird of the great house and the Isle of Kerrera. Lark is but the keeper of his bees and the woman he is hoping will provide a tincture that might help his ailing wife conceive and bear him an heir. But when his wife dies suddenly, Magnus and Lark find themselves caught up in a whirlwind of accusations, expelled from their beloved island, and sold as indentured servants across the Atlantic. Yet even when all hope seems dashed against the rocky coastline of the Virginia colony, it may be that in this New World the two of them could make a new beginning–together.

Laura Frantz’s prose sparkles with authenticity and deep feeling as she digs into her own family history to share this breathless tale of love, exile, and courage in Colonial America.

What I Loved: From the moment I opened the book, I felt as if I had stepped into another world. Frantz has a beautiful gift for using words to create a setting that is equally as lush and vibrant as the real-life areas she portrays. The characters were so endearing and it was easy to sympathize with their plight. The spiritual content was weaved into the story in the most natural and effective way. Both of the main characters had a strong relationship with the Lord. It was refreshing to find that the story revolved around how their trust in Christ was the anchor through the difficult storms in their life. While readers aren’t likely to find themselves in the same set of circumstances, they will be able to relate to the helpless feeling of a life spinning out of control.
A Bound Heart was stunning from start to finish and a great way to start your new year!

Rating and Recommendation: I’m giving A Bound Heart 5 stars and recommending it to those who enjoy Christian Historical Fiction or fiction centered around Scotland, the later 1700s, Colonial America, and slavery.

~ I received a copy from Revell. I was not compensated for this review or required to give a favorable one.

4 thoughts on “Book Review: A Bound Heart by Laura Frantz”