There is nothing more recognizable about a book than its cover. We’ve been told to never judge a book by its cover, but we’re nothing if not rebellious…and a little judgmental. 😉 Therefore the design of the book cover is bound to get a certain amount of attention. As it should. Here is some fun behind the scenes details behind the cover of Where Can I Flee.

First of all, we’ll start with the basics. The photo was taken by me on a very hot summer day and was shot not in front of a green screen but on location. We set up along the Duck River in Normandy, Tennessee on the back of the Arrowhead Ranch, where I took over 200 photos. I packed a simple lunch for myself, Tyler Bowman (the model) and Joseph Byrd (reenactor).

Here’s a pic in the middle of setup. We used 2 tents for the backdrop. 🙂 You can see we had an extra hand that day. Joseph brought along his oldest son. 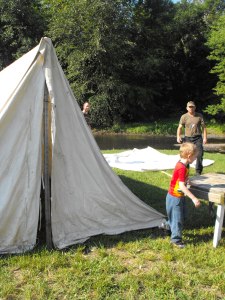 Here is a look at some of the early cover options. You can see the different fonts I tried during this stage. Choosing a look that would work for the future 3 books without actually having the pictures at hand was difficult task but eventually something was selected. 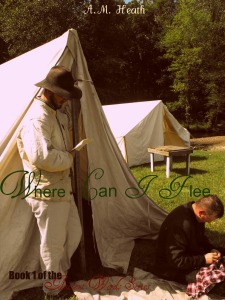 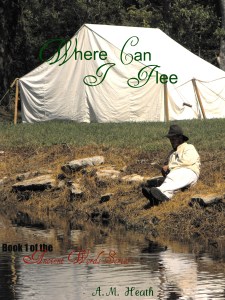 Next I want to show you the top 2 pics. You’ll easily see how nearly identical these shots are, yet one was perfect and the other less so. What do you think? Did we choose correctly?

From the very beginning, I wanted the cover to show Frank Harper reading a letter from his sister, Claire. The letters, as you’ll know, are key to the entire story as well as to the entire series. We’ll see a new set of letters on each book cover except the 4th book in the series. To be as authentic as possible, I asked a friend to copy one of the letters from the novel onto special paper for me. Christy Gragg, a dear friend that I’ve known since kindergarten, took up the pen and wrote for Claire. Which letter is on the cover? Claire’s letter from chapter 19. This letter originally contained the most scripture but was slimmed down considerably during the editing process. The cover letters are now very dear to me and hold a special place on my bookshelf.

I hope you enjoyed a closer look at the cover of Where Can I Flee. And now, I leave you with a fun cover remake:

2 thoughts on “Behind the Cover: Where Can I Flee”