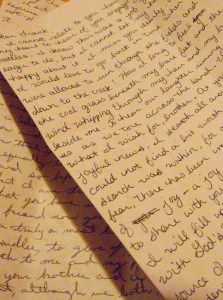 From the moment I started the Ancient Words Series, I became a diligent student of the 1860s. I soon found myself being immersed in the history of the American Civil War. Part of that study has led me to read countless letters and journals written by the men and women that experienced it. Along the way, I have come across some of the most interesting stories that have left me wondering why I bother to write fiction when the reality is so remarkable. I want to share some of the letters that have left an impression on me in a series of blog posts throughout the year. I hope you’ll enjoy them as much as I do!

(The beginning of this letter was difficult to understand so allow me to paraphrase) The writer tells of an event he witnessed after a battle. A Confederate soldier was carrying a Union soldier on his shoulders all the way to the field hospital. Both were injured and laid on the field beside each other. The Union soldier was bleeding heavily, and the Confederate had taken a bullet on the side of his face, leaving him blind in both eyes. After the fighting had ended, the two began to talk and here is the story the writer tells:

“The groans of the wounded Yank reached the alert ears of his sightless Confederate neighbor, who called to him, asking him the nature and extent of his wounds. On learning the serious nature of them, he said: ‘Now, Yank, I can’t see, or I’d get out of here mighty lively. Some darned Yank has shot away my eyes, but I feel as strong otherwise as ever. If you think you can get on my back and do the seeing, I will do the walking, and we’ll sail into some hospital where we can both receive surgical treatment.’ This program had been followed and with complete success.”

The writer tells how the pair refused help from anyone else and how the Union men surrounding them cheered them both on. Once in the hospital, they both received proper care.

*Click on the “Civil War Letters” tag on the right to read more real letters.