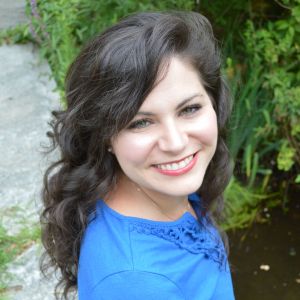 I’ve had the honor of meeting Alicia Ruggieri on Goodreads about a year and a half ago. We quickly became friends, and I’ve been blessed to follow her  writing career. And doubly blessed to work with her as a critique partner on All Our Empty Places as well as having her insight on my critique team for In the Shadow of Thy Wings. She’s a beautiful lady with a Christ-focused heart. I’ve sat down to ask her some pointed questions about herself and her latest novel, All Our Empty Places. I hope you enjoy getting to know her as much as I did. Oh, and did I mention that I’m giving a kindle copy of both The Fragrance of Geraniums and All Our Empty Places? You’ll find more details at the bottom of the page. 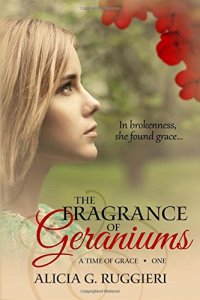 The Fragrance of Geraniums – Book One in the “A Time of Grace” trilogy – available now.

In brokenness, she found grace…
Told from multiple perspectives, this is a powerful story of three women – of the threads of mercy that connect them – and of heart-wrenching sorrows alchemized by the Heavenly Father’s overwhelming redeeming grace.
Rhode Island – 1934
A GIRL
Grace Picoletti has nothing going for her – but she’s determined to succeed in life, nonetheless. Born to severe destitution, she claws her way up from the pit of family shame and secrets. She avoids close friendships – even with the likable, persistent Paulie Giorgi…
A WOMAN
Despite her own agonizing emotional pain, childless Emmeline Kinner reaches out to a young woman so far beneath her. She could never have known whom else God would set in her path through her friendship with Grace…
A MOTHER
Long ago, Sarah Picoletti resigned herself to a loveless, abusive life – and she believes that her daughter Grace must inherit the same fate. Yet Sarah’s own soul cries out for the blessed peace and hope of which the radio minister speaks… 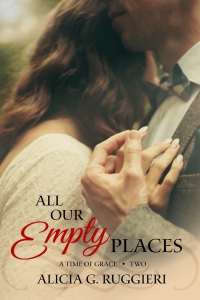 All Our Empty Places – Book Two in the “A Time of Grace” trilogy – releases September 29th.

In 1935, when the bank calls in her mortgage, Sarah Picoletti – now a penniless widow – finds herself and her children on the brink of homelessness. Sick at heart, she plans to beg her brother in New Jersey to take her family in.
Then Doctor Samuel Giorgi knocks on her door. Godly and well-off, Sam seems to have put the careless ways of his youth behind him, and he also appears to have one desire: to make Sarah his wife, two decades after he broke their engagement.
However, nothing prepares Sarah for the storm that breaks once she makes her decision. Everywhere she turns, the errors of her former choices confront her, insisting on her inferiority and the irreparable brokenness of her past. Sarah begins to wonder if Christ really can bring true redemption or if He is limited by her frailty.
Meanwhile, her daughter Grace faces new challenges in her own life. When her relationship with Paulie changes unexpectedly, Grace realizes that she must make a decision with the potential to alter both of their futures.
Compassionate and intensely poignant, All Our Empty Places paints the portrait of a mother and daughter with broken pasts, who dare to step into a future overflowing with the grace of the Cross.

What message are you hoping the reader will pick up?

What’s the focal verse for All Our Empty Places?

There are two important verses for this novel.

2 Corinthians 12:9 – And He said to me, “My grace is sufficient for you, for My strength is made perfect in weakness.” Therefore most gladly I will rather boast in my infirmities, that the power of Christ may rest upon me. And Ezekiel 36:36 – Then the heathen that are left round about you shall know that I, the LORD, build the ruined places and plant that [which] was desolate. I, the LORD, have spoken it, and I will do it.

Can you share the inspiration behind your latest novel?

All Our Empty Places came out of two things. First, the knowledge that Sam and Sarah still had to finish their story; and second, the conviction that I didn’t want people who read The Fragrance of Geraniums to think that everything would just work out in a fairytale manner for the Picolettis. I strongly believe in total redemption, but I want to present that redemption in a real-world way. The road of grace can be a very difficult, rocky place. Thus, Sarah and Sam’s story needed to continue.

How did you choose your character names?

A couple of ways. J Sarah and Grace both take their names from the top girls’ names of the decades in which they were born. Grace also fit the theme of the trilogy very well! Emmeline is simply a favorite name that happened to fit the time period. Paulie is a popular nickname for Paul in Rhode Island… and the name of a very good deli here, too. J Many of the schoolkids also received names from top 100 lists of the day. Mrs. McCusker – Well, that name just sounded like her: crusty and sergeant-like.

Will we find YOU in any of these characters?

Grace’s empathetic approach to her brother Ben is definitely me – how she knows where he’s coming from and doesn’t excuse his sin, but feels intense compassion for him and yearns for him to know the truth of the Gospel, to be set free. Sarah’s ability to block any display of emotion so that no one knows what she’s thinking or feeling – I can do that. Sam’s logical approach to fixing situations – that’s my natural problem-solving nature at work.

But I think, more than anything, the message at the heart of the story is one that I can relate to. It is so easy for me to try to live in my own sufficiency, in my own power – and yet, when I try, it only leads to heartache and discouragement. Time and again, God has led me to the verse that’s so central to this novel, and I’ve realized that His grace is sufficient for me, for His power will be made perfect in my weakness.

What does a typical writing day look like for you?

My typical writing day (when I’m drafting) starts with lots of coffee in a mustache mug that says, “I’d love to stay, but I really mustache.” (Get it?) I’ve found that it is imperative to start my day with the Lord – and to end it with the Lord, so I have my quiet-time to start. Then I proceed to clean my pug’s facial folds (Yep, it really happens daily.), get ready, putter around doing various household tasks. I like to sit down to write by late morning, if not earlier. Then I’m usually writing until late afternoon – with several timed breaks. Sometimes, I’ll write again after supper, but not usually.

Are you a snacker or do you play music while you write?

No, I don’t generally snack, but I do drink coffee. It builds the brain cells, you know. 😉 And the best kind to build brain cells is hazelnut with cream only.

Yes, I love to listen to music. I generally write much faster and more fluidly with appropriate music. It makes me feel as if I’m watching a film play out. For All Our Empty Places, I listened to a lot of hymns (Chris Rice and Fernando Ortega) and to some Tenth Avenue North – their songs “You Are More” and “Worn” capture a lot of what Sarah experiences in Places.

What future project can we look forward to?

Book Three – yet unnamed – in A Time of Grace, in which I’ll conclude the Picoletti/Giorgi stories – at least for now. I am so very much looking forward to sharing more about this next novel in the weeks and months ahead, Lord willin’ and the crick don’t rise.

Now for a little fun. 🙂 I couldn’t help but notice how you offer your characters some rather difficult choices and I think it’s only fair that we turn the tables on you. Lol I have a selection of Tough Choices for you:

Home. The most important people – the most important part of my life – are there. And I think that there’s something inside all of us – well, inside me, at least – that longs for our real Home, so our connection to a particular place or people on this earth is a shadow of something utterly Real.

If you could only keep one of the 66 books of the Bible which would you choose?

Ai-yi–yi! Is this an answerable question?! 😉 I’d probably take the Gospel of John if forced at swordpoint.

If you had to give up tea or coffee which would you give up?

Tea. No contest there. 🙂

If you could only keep the works of one classic author whose would you keep?

If you weren’t writing which career would you seek out?

I would love to teach and direct children’s theatre again. ❤

If you could only eat one dessert for the rest of your life, which would it be?

My mom’s Italian Easter bread. Oh, the braided folds of anisette-flavored goodness! I’m not ashamed to admit that I sometimes eat it for breakfast, lunch, and dinner for a few days every Easter season!

To celebrate Alicia’s new release, we’re giving away a kindle copy of both books in the “A Time of Grace” series. Click here to head to the rafflecopter.
This giveaway will close at September 28th at midnight and the winner will be announce Tuesday morning on the blog.

Join me next Thursday when I share my personal review of All Our Empty Places, talk to Alicia again about the inspiration behind the story, and offer you one last chance to win the book.

19 thoughts on “A Time of Grace Giveaway”