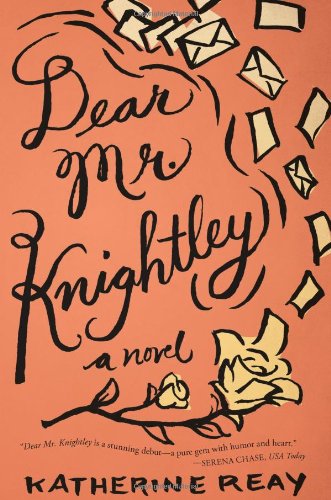 Samantha Moore has always hidden behind the words of others―namely, her favorite characters in literature. Now, she will learn to write her own story―by giving that story to a complete stranger.
Sam is, to say the least, bookish. An English major of the highest order, her diet has always been Austen, Dickens, and Shakespeare. The problem is, both her prose and conversation tend to be more Elizabeth Bennet than Samantha Moore.
But life for the twenty-three-year-old orphan is about to get stranger than fiction. An anonymous, Dickensian benefactor (calling himself Mr. Knightley) offers to put Sam through Northwestern University’s prestigious Medill School of Journalism. There is only one catch: Sam must write frequent letters to the mysterious donor, detailing her progress.
As Sam’s dark memory mingles with that of eligible novelist Alex Powell, her letters to Mr. Knightley become increasingly confessional. While Alex draws Sam into a world of warmth and literature that feels like it’s straight out of a book, old secrets are drawn to light. And as Sam learns to love and trust Alex and herself, she learns once again how quickly trust can be broken.
Reminding us all that our own true character is not meant to be hidden, Reay’s debut novel follows one young woman’s journey as she sheds her protective persona and embraces the person she was meant to become.

I know it’s only January, but I can already tell that Dear Mr. Knightley will remain one of my favorite reads for 2016. There was so much to treasure here in this story that I wanted to start the book over again the same day I finished it.

What I Liked:
First of all, the entire novel is written through letters!!!! HOW COOL IS THAT!? I love letters and journals so this type of story telling was just perfect for me and had me smitten from page one.
For the Jane Austen fan, you’ll find quotes galore here, making the story itself a special treat. For those that haven’t read the classics, the quotes are self-explanatory or else the author weaves in the meaning so you’re not left guessing what they were trying to say.
Dear Mr. Knightley surprised me in several ways. I wasn’t expecting such a heartfelt story or one that would have me crying alongside the character.  Sam’s difficult past comes to light little by little and some of the details are a bit hard to swallow….hence some of those tears. I want to warn more sensitive readers that the child abuse mentioned in the story can seem a little heavy at times. The story itself doesn’t take place during her most difficult years so the abuse that she suffered is only mentioned during flashbacks instead of having to walk through it with the character. This makes it a lot easier to handle since the hard scenes are broken up by lighter ones.
Sam herself is a more comical character as she attempts to blend into normal life. Again, the comical thread helps to keep the story lighter when the darker things of her past weigh it down.
The love story is beautiful. The secondary characters and the hero are all charming and complex in their own ways.

What I Didn’t Like:
There were a lot of references to alcohol throughout the book. Sam and the main characters are never seen drinking or known to drink. But it’s part of the social world she belongs to and is worthy of pointing out for those readers who may be put off by it.
The one thing that really troubled me was the message brought in at the end of the book. Throughout the story, we’re picking up themes about forgiveness, bitterness, accepting love, accepting GOD’S perfect love and provision, and learning to be the person God created you to be. Without giving away any spoilers, Sam comes to a place where she’s ready to reach out and claim the joy that she’s always lived without. Reay has set up everything she needed to show that true joy comes from Christ alone, but, in the end, she just couldn’t bring herself to say those words out loud. This was disappointing for me because Reay had done an excellent job showing healing through Christ and other practical applications. But when it came to the final plunge, she stopped short and showed us how to attain joy through making healthy adjustments in your life and in your thinking. While these things ARE helpful, without Christ, they will be empty. Because of this, I’ve battled with whether to leave Dear Mr. Knightley at the 5-star rating it otherwise deserved or to drop it a star because that final step really was that important.

Overall, this was a remarkable story. It does show healing in a real light. And it’s already sitting on my Reread List.