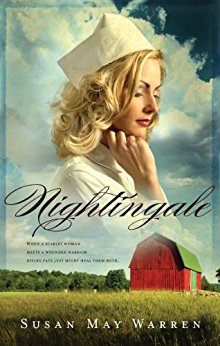 Wolfgang Jager has found himself on the wrong side of a world war. Esther Lange is trapped inside a war of her own. Can loving their enemies set them both free? Wolfgang Jager grew up in Mason City, Iowa. So, what’s he doing fighting for the Germans? If only his parents hadn’t moved back to their native Germany when they believed Hitler to be a hero. It’s almost a relief when he is captured by the Americans and sent to a Wisconsin POW camp. When the darkness turns to nightmare and Wolfgang is accused of murder, can he stand firm in his faith–and snatch the woman he loves out of the mouths of lions?

What I Loved: How many ways can I tell you that I loved this book? I’ve read only one Warren book before picking this one up and while I expected to enjoy it, I was surprised to love it quite so much. Warren kept the twists and turns coming in this book so much so that she kept me guessing down to the VERY end of the book. But beyond an amazing plot, realistic setting, and well thought out characters, Warren brings to life a strong Biblical message of accepting God’s forgiveness versus trying to earn forgiveness and of putting Christ first in your life. I was blown away, both by the compelling story and the truths presented.

Rating and Recommendation: I highly recommend Nightingale to anyone who enjoys Christian Historical Fiction or WWII fiction and I’m giving it 5 stars.

2 thoughts on “Book Review: Nightingale by Susan May Warren”