Happy (belated) Birthday to a beloved character, Ralph Williams!
Today, Fiction Diner meets the pages of my own work as we celebrate one of my characters with food. Throughout my novels, I’ve made mention of a special cranberry cake. This recipe belonged to the Williams family and was only baked twice a year: Christmas and Ralph’s birthday.
When readers started asking me for this fictionalized recipe, I began searching for one. With the help of my readers, I present to you today the official Williams Family Cranberry Cake. I hope you enjoy!! 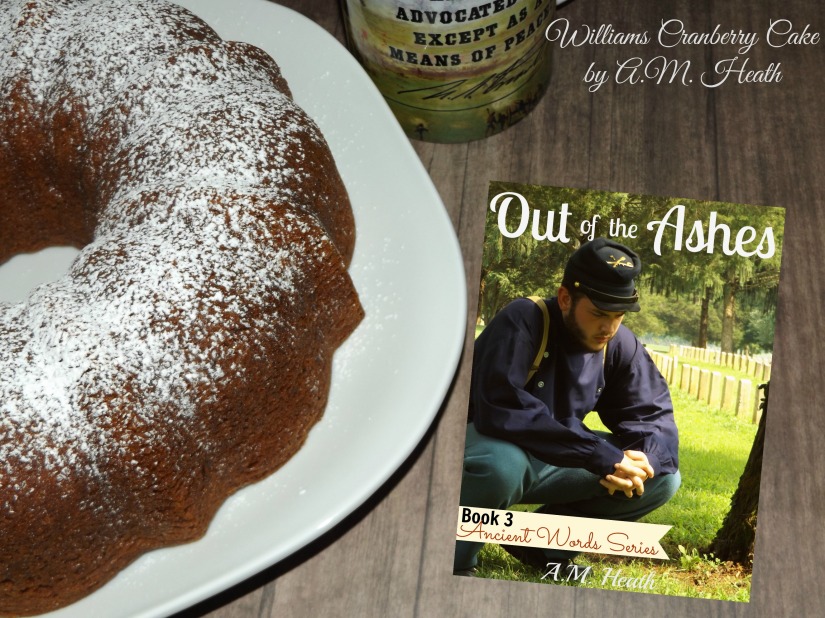 I’m about to share with you a recipe that was adapted from two different jam cake recipes. I followed the ingredients of one recipe, with the slight alteration, and the directions from a local community cookbook, and I created for you a brand new recipe.
The cranberry flavor isn’t very strong. In fact, none of my kids knew what they were eating. The spices used in this cake stands out more and is perfect for the winter months when this cake was fictionally known for being served. I hope you enjoy it as much as we did!
There is some interesting history behind one of the recipes I had used. The ingredients were, ironically enough, found in The Confederate Cookbook. It’s a Sons of Confederate Veterans publication, and each recipe submitted shares the brief history of a real Confederate Vet. But let’s continue down this reality-is-stranger-than-fiction path. The recipe I used shared the page with a Cpl. George Washington Small who was named after George Washington. Oddly enough, Cpl. Small died on Feb. 22 of 1925 which also happens to be George Washington’s birthday…and Ralph’s birthday! How neat is that?! When I assigned Ralph his birthday, I didn’t realize I had chosen Washington’s birthday until I was preparing for this post. But enough coincidences, let’s get on to the dessert, shall we!

Directions:
Set your oven to 350. Grease and flour a bundt pan.
I used canned cranberry sauce. You know, the kind you can actually slice up because it’s so thick. Because it’s so thick, the consistency isn’t as loose as jam. In order for the sauce to mix into the batter better, I first put my can-shaped sauce in a bowl and took the potato masher to it. I used the plain jelly kind, not the one with the berries, but I don’t see why this recipe wouldn’t work with either variety. When I made the recipe the first time, I attempted to toss in spoonfuls of cranberry sauce the same as I would have with jam, but I ended up with clumps of sauce in my cake. So the only thing you’re doing in this step is simply breaking it down because your mixer isn’t going to later.
Cream butter and sugar until light and fluffy.
Add  vanilla and eggs, one egg at a time, beating well after each addition.
Sift all dry ingredients together and add alternately with buttermilk, beating vigorously after each addition.
Mix in cranberry sauce.
Fold in nuts.
Bake for about 45 minutes or until cake is leaving the sides of the pan and the toothpick is clean when you insert it.

Tips:
This cake goes great with a pot of tea!
You can dust it with powder sugar for decoration or an extra kick of sugar. The cake is fairly sweet on its own, though.
If you don’t have buttermilk on hand, you can make your own. I do this all the time and haven’t bought buttermilk in nearly 10 years. Here’s how you do it: Pour 1 Tb vinegar or lemon juice into the measuring cup BEFORE you add the milk. Pour the milk in next, measuring up to the desired amount. I’ve always done 1 Tb per cup of milk. If you need more buttermilk, adjust accordingly. Stir and let sit for about 15 minutes, then you have buttermilk.
Because this recipe was taken from a jam cake recipe, you could alter it by using 1 cup of seedless blackberry jam instead of the cranberry sauce. 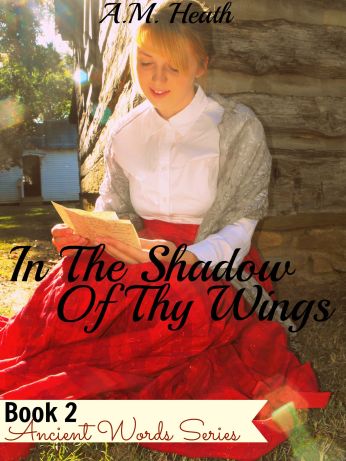 Novel Quote:
“I might be a Yankee in serious need of a bath, but I ain’t never been a dirty Reb.” ~ Ralph Williams, In the Shadow of Thy Wings by A.M. Heath