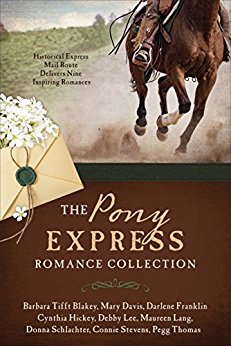 Join the race from Missouri, across the plains and mountains to California and back again as brave Pony Express riders and their supporters along the route work to get mail across country in just ten days. It is an outstanding task in the years 1860 to 1861, and only a few are up to the job. Faced with challenges of terrain, weather, hostile natives, sickness, and more, can these adventurous pioneers hold fast, and can they also find lasting love in the midst of daily trials?

A Place to Belong by Barbara Tifft Blakey
An Express rider promises to help fulfill Abigail’s dream to return to her childhood home. Jacob doesn’t trust him, but what other option does she have?

An Unlikely Hero by Mary Davis
BethAnn along with her little sister are running from a mistake and find security at a Pony Express station and love in the quiet affection of a shy Pony Express rider.

The Gambler’s Daughter by Darlene Franklin
Gambling debts drive Caroline Adams’s estranged father away from the Chelan Swing Station before her arrival. Can his replacement conquer the temptations goading them both to prove himself worthy of Caroline’s love?

Her Lonely Heart by Cynthia Hickey
Widow Sadie Mathewson wants to find love again. But when an injured pony express rider shows up at her station, love finds her in an unexpected way.

My Dear Adora by Maureen Lang
Chip Nolan must dispatch the letters his brother can’t after being left for dead on the Pony Express trail. One letter stands out, addressed to “My Dear Adora”— stirring Chip’s heart before he even meets its recipient.

Ride into My Heart by Debby Lee
Kimimela works at a Pony Express station where she struggles to cope with the death of her sister. When she’s kidnapped by gun smugglers, can her friend, Pony Express rider Gabe, rescue her in time?

Echoes of the Heart by Donna Schlachter
A mail order bride. A crippled stationmaster. No way out for either of them—except with each other. Can they surrender their hearts and find true love?

Abundance of the Heart by Connie Stevens
Unfulfilled goals haunt Fletcher and Mercy at a remote Nebraska outpost, but unexpected circumstances may offer a last-chance opportunity to pursue the dream of riding for the Pony Express.

Embattled Hearts by Pegg Thomas
Alannah Fagan escaped from a battle she wouldn’t survive. Stewart McCann left behind a battle he couldn’t face. Thrown together at Horseshoe Station, can they find something worth fighting for?

My Thoughts on the collection: I wanted to like this collection so much more than I did. While there were some areas to be commended, overall I was really disappointed. I first fell in love with the concept behind this collection. The Pony Express Romance Collection will appeal to those who enjoy a clean western. I loved the idea of focusing on this one area in history. Each of the authors did a great job in bringing the setting to life. Each story felt authentic, and I was surprised at how vastly different each plot was from one another. I never felt like there was a repeat in the stories even though they worked with the same elements.
With the exception of one or two, the stories lacked depth that left me wanting more. In most cases, the characters fell flat for me, and the plots didn’t have enough space to be properly developed.
In the case of the final three novellas, I was put off by their spiritual journey. Each of these novellas used characters that didn’t believe God cared for them or listened to them when they prayed. They all seemed to be in a state of rejection of God. And each went from thinking God didn’t care to believing that He did. I would have liked to have seen a more clear understanding of salvation in each of these. There’s a difference between believing some things about God and believing unto salvation. In a Christian work, I expect more.

A Place to Belong: I was immediately taken in by Abigail and Jacob. Overall I really liked their story. There was a sweet innocence to it and she carried a strong biblical message throughout the novella. However, I did struggle with two points. There was something oddly simplistic in the dialogue that kept tripping me up. It’s hard to pinpoint exactly what wasn’t working for me. And I’m sorry to say that while she kept a great message, I couldn’t agree with where Abigail refers to God as her mother. I understand the concept behind the idea–God is our All in All. But I’m not comfortable with anyone calling God something that He never calls Himself in the Bible.

An Unlikely Hero: Davis crafted a solid story here. I can always appreciate a shy hero and a spunky child. However, the heroine felt flat to me.

Her Lonely Heart: The story was very promising, but suffered from one-dimensional characters, especially when it came to the antagonists.

My Dear Adora: Another promising story. I was drawn in quickly but lost interest further in. There was something lacking here that I couldn’t quite put my finger on.

Ride into my Heart: This one started very strongly, but then fell apart. It felt like large sections of the story was summarized. This is one of those novellas that either the plot needed to be trimmed or given more space.

Echoes of the Heart: I found this one to be highly entertaining. I sympathized with the characters a great deal. Sadly, the characters contradicted themselves way too often, and it weighed on an otherwise good story.

Abundance of the Heart: This was one of the only stories that felt full and complete to me. My struggle here was with the heroine’s hostility. It seemed a little over the top to me considering the circumstances.

Embattled Hearts: Like a breath of fresh air, Thomas really wrapped up this collection in a big way. The plot was the right size for a novella. The characters were spot on. Great job!

~I received a copy from the publisher through Netgalley. All thoughts are my own. I was not compensated for this review.