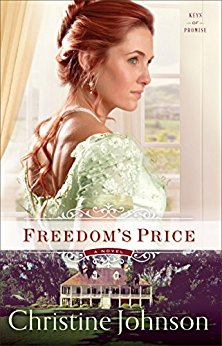 When Englishwoman Catherine Haynes loses both her parents and her home in 1856, she decides to cross the Atlantic to find her American mother’s family in Louisiana. She enlists the help of Tom Worthington, a dashing Key West man who makes his living salvaging wrecked ships, but whose real goal in life is to bring to justice the man who stole his father’s ship and caused his untimely death.

When Catherine finally arrives at her family’s plantation, she finds it in disarray and her family absent landowners. Torn between returning to Key West with Tom or beginning the hard work of restoring the plantation, Catherine soon finds herself snared in a plot to steal her inheritance. When an incredible secret comes to light, both she and Tom will face a choice. Can they relinquish the dreams that have been holding them captive in order to step forward in faith–even if it costs them everything?

My Thoughts: There is much to praise here in Johnson’s latest release. It’s an intriguing story from the very start and one that I could hardly put down. As the mystery unfolds, the suspense increases. For me, the only drawback were the characters. While I liked and sympathized with them both, they never felt very consistent to me and they often swung from being too naive to being too astute. But even this couldn’t keep me from turning pages long after I should have been asleep. Freedom’s Price was an exciting conclusion to the Keys of Promise series. I look forward to more Christine Johnson in the future.

Rating and Recommendation: I’m giving Freedom’s Price 4 stars and highly recommending it to those who enjoy Christian Historical fiction or a light Christian mystery/ suspense.

~I received a copy from Revell. I was not compensated for this review. All thoughts are my own.