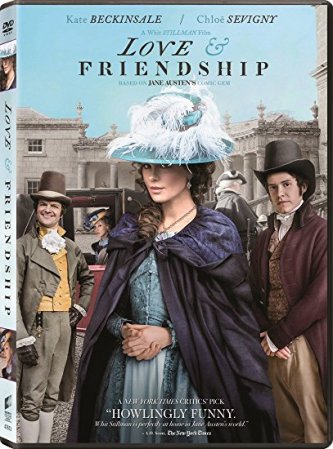 I had the pleasure of watching the latest Austen movie, Love and Friendship, in the same week that I read one of her earliest stories, Lady Susan. Since these are lesser known works, I thought it would benefit you to get a full review. For those who didn’t know, Love and Friendship is based on the story Lady Susan. Before I review the movie, the book, and the audiobook, let’s take a look at the story itself.

The Story: Lady Susan
I had always heard that Lady Susan was an unfinished work. I was under the impression that unfinished meant that she had not finished writing it and therefore the plot wouldn’t be complete. Who wants to read a story you’ll never have an ending to? Because of this, I had put off reading it for several years. But I’m happy to announce that this just isn’t so. Lady Susan is a finished story but is not as polished.
Lady Susan is different from the common Austen novel in two major ways. It’s an epistolary story therefore written completely through letters. And the main character, Lady Susan, is NOT the heroine Austen is known for. She’s not the sweet downtrodden female, although there is a sweet heroine to cheer for. But Lady Susan is manipulative, selfish, a liar, a flirt, and most likely an adulteress as well.
Now, this hardly sounds like something worth reading, but I beg you to think again. While the main character is…a total mess, we also have endearing characters to root for. Lady Susan’s conduct stands in clear contrast to the conduct of the more noble characters. And we’re treated to the classic wit of Austen all throughout the story.
Knowing that Lady Susan is an early work, you can easily see signs of her later, more famous works. The names of Churchhill and Martin will ring a bell with Austen fans. You’ll also see characters that remind you of some of your favorites. Lady Susan herself brings to mind several characters that I’ve loved to hate from her other works.

The Book:
As mentioned above, I found Lady Susan to be brilliantly written. You have to understand going in that with this being an early work, there may be areas of her writing that aren’t very strong. I’ve little doubt that someone has come along already and picked apart everything they felt was wrong with it. But for me, the thing I love the most about an Austen novel, or any other classic, is the language. I love the way they word their sentences. There’s a romantic, poetic tone to their speech that I just flat out enjoy. And all of that is present here which made it enjoyable to me.
I had picked up the story (we contemporaries would probably label it as a novella because it’s shorter than a novel) several months ago but didn’t finish it. There’s just a lot of information to pick up at once without the benefit of narration. Reading letters from person to person makes it harder to grasp who these people are and their connections to one another. But despite the rocky start, things mellow out with time.
*The link will take you to a free ebook version from Amazon.

The Audiobook:
I had the opportunity to pick up the audiobook and decided to give this story another try since I never finished the written version. The link will send you the version I listened to.
They used different actors for each character. This was so much easier to listen to. Overall, I enjoyed it. However, there was one voice that got on my nerves. There was a whine to her speech, that while being very accurate for the character, grated on my nerves the more I listened to her. But it’s only three hours long, so it’s a quick audiobook just perfect for a day trip or in between longer audiobooks.

The Movie:
If you’ve watched Austen movies over the years, you would have been shocked at some of the vulgar scenes we’ve witnessed. I’m happy to announce that this was a CLEAN movie. Granted, let’s remember that Lady Susan, while it never exactly says, is thought to be an adulteress. So there are adult and sinful themes. But Lady Susan’s sins are hinted toward and never fully exposed so younger viewers aren’t likely to pick up on the meaning of the conversation. And most importantly, we don’t SEE anything unpleasant or shocking…aside from the unfortunate low cut gown. Again, there are also honorable characters involved and Lady Susan’s conduct is always viewed as shameful. SHE never finds shame in her conduct, but the viewer is always encouraged to think the worst of her lifestyle, so I didn’t feel like her sin was encouraged or condoned.
Love and Friendship has a strong comedic tone to it. I laughed out loud a few times. Some of the characters are meant to be ridiculous and you can’t help but laugh at them because they don’t seem to notice their faults.
Again, the beginning tripped me up. I liked the way they opened the movie by introducing the characters. But even then, I found it to be a lot of info to try to soak up and I was still lost for the first thirty minutes or so. But I’ve learned over the years that sometimes you just need to watch a period drama more than once to fully understand it.
Watching the movie first had helped me to grasp the story when I listened to it later that week. And I must say that this was probably the closest adaptation I think I’ve ever seen. The characters were not altered from Austen’s vision in any way that I could tell. And I can’t think of any real plot point that was altered. The original story was told through letters and the movie was acted out without the use of letters so some of the characters conversed in the same room instead of reading correspondence. But the point and the purpose was always one and the same. In that regard, this was extremely well done.

Rating and Recommendation:
I think my first impression of either the book or movie was to give it 4 stars. But it has that sort of endearing quality to it that grows on you with time and it has already been moved above a 4-star rating in my opinion. I plan to add the movie to my collection and I’ll reread Lady Susan again someday.
I recommend it all Austen fans. I think you’ll find something worth enjoying here, even if it never becomes your new favorite Austen movie/story.