In the year 1912, nineteen-year-old Christy Huddleston leaves home to teach school in the Smoky Mountains — and comes to know and love the resilient people of the region, with their fierce pride, their dark superstitions, their terrible poverty, and their yearning for beauty and truth. But her faith will be severely challenged by trial and tragedy, by the needs and unique strengths of two remarkable young men, and by a heart torn between true love and unwavering devotion.

Having been written in the 1960s and inspired by the author’s mother, Christy is thought to be classic. Leastwise, it feels that way. I want to share a beloved favorite with you. I feel like it’s a forgotten gem. I fell in love with Christy when I was a young girl and Kellie Martin was on tv. I held a copy of the novel on my shelf for YEARS and have just now read it. I also had the pleasure of listening to the bulk of the story in audio. So today, I’m bringing to you my honest opinion of the book, the tv series, and the audio version.

What I Loved: I remember watching the show and falling in love with the story. Reading the book was just as enchanting! The setting is so rich. The accents, the visuals. The harsh realities of the setting. Marshall had done an excellent job pulling the reader in and planting them in the Appalachian mountains.
I enjoyed watching Christy grow and rise up to the challenges around her. More than once, she sat down to seriously question God and her immature faith. I found it refreshing and was pleasantly surprised by how deep she went. These were factors that the show didn’t cover to such a degree.

What I Didn’t Like: There were times when the characters’ theology would feel so far south that I wondered if Marshall would ever bring them back to truth again. I was relieved when she did come through and balance out the false religion with Biblical truth.
However, there was a scene where the character seems to be in between life and death. I know a lot of Christian media focus on such things these days. I’m not going to argue in a review. My aim is only to point out something that I didn’t agree with for those who might be turned off by it. I wasn’t quite on board with this section of the story, but in light of the greater truths she brought to pass, I feel that I can overlook the small factor we disagreed on in the end. At the end of the day, this wasn’t the focal point of the story, so I felt it was easier to brush aside. But each reader will have to judge for themselves.

Warning:  Catherine Marshall doesn’t write in an overly graphic way. However, she does remark on some tough realities. This book would be best for a more mature and less sensitive audience. As a sensitive reader, I was able to stomach it. I think what made this easier to handle was that the squeamish areas weren’t focal points of the entire story, so they weren’t dwelt on for very long. But reader be warned, there were some shocking and disheartening moments. If you need more details, feel free to email me!

Rating and Recommendation: I’m giving Christy 4.5 stars are recommending it to mature readers who enjoy Christian Historical Fiction or for those looking for a newer classic.

Audio Review: Having loved the tv show and Kellie Martin since I was a child, I enjoyed listening to the audio book read by Kellie Martin. There was something special about being able to hear the accents of the characters as well as hearing the story told from the actress herself. It’s one that I plan to add to my collection.
*Note there are more than one audio version available, so be sure to double check on the narrator before buying if you’re looking for this particular version. 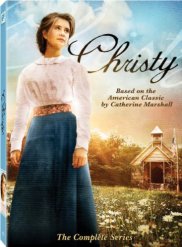 Tv Series Review: For those who have watched this when it was on tv, I don’t have to convince you. But for the rest of you: If you’re a fan of When Calls the Heart, then you’ll enjoy this series. Featuring a young teacher way out of her element, Christy is a  must watch! The setting is drastically different so it’s not a “copycat” series to When Calls the Heart. And if we were to talk copycats, Christy is older. 😉
Sadly, the show was only on for one season. This is a major upset for all fans. If you’re considering giving this series a try, at least you can walk in with your eyes open. They did come back to bring an ending to things with a Return to Cutter Gap mini series…or maybe it was a movie. I’m not too sure. Kellie Martin and at least one of the other main actors didn’t return for it. I’m sure it’s still a satisfying ending, but I’ll be honest and say that I haven’t watched it yet. Even with the hiccup of not finishing with some of the same actors, I would still highly recommend this to anyone looking for period drama, family drama, or Christian drama.
I’ve found reasonably priced copies of Christy on all the Chrisitan media sites in the past.
And if you’re concerned about the warning I left on the novel, rest assured that the tv show doesn’t take things quite so far but keeps it family safe for as much as I can remember. I don’t recall any foul language or intimate scenes or inappropriately dressed actresses. Because of the reality of the setting, you will see things such as moonshine, but it’s always held in a proper light and the consequences of it are clear.