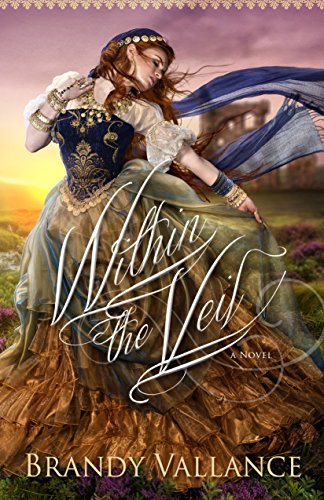 They never should have met. But they might be made for each other.

Feya Broon, a Scottish half Gypsy, knows what it is to go hungry. Trapped in the Edinburgh tenements with a father lost to his past and only the faded memory of her mother’s faith, Feya is desperate to provide for her siblings. When an ill-conceived plan leads to thievery, she finds herself in the last place she’d ever want to be–captured by a palace guard. But there’s something about this man that tears at every preconceived notion she’s even had about the haughty English.

Alasdair Cairncross never dreamed he’d be forced to transport a Gypsy woman halfway across the wilds of Scotland. The timing is disastrous, considering his fiancée’s imminent arrival and his father’s political goals. Not only that, but the fiery young woman threatens to lay bare secrets Alasdair would rather keep hidden. And yet the farther they travel together, the less concerned he finds himself with duty–both to the crown and to the plans his family has for him.

As their walls begin to crumble, Feya and Alasdair must fight to survive a decades-old feud, a Highland kidnapping, and the awakening of their own hearts.

My Thoughts on the Story: I was hooked from the moment it started. This one felt so outside of the box in terms of standard Christian Fiction. And I mean that as a great compliment! I loved it!! The characters were properly developed, even down to the villain. The setting was rich and easy to envision. Vallance stepped out and gave her hero a unique ability or disability, depending on your viewpoint. This helped to set him, and the entire novel, further apart from the norm.
The one thing I would caution is that while Vallance didn’t go too far in terms of passion for a Christian Fiction novel, she went plenty far enough. Within the Veil would be more appropriate for a mature audience.

My Thoughts on the Audio Version: Everyone’s idea of an enjoyable reading voice will be different but this narrator was among my favorites. I liked her overall speaking voice and appreciated how she was able to slip into thicker Scottish accents when needed.
However, it takes a little time to adjust to her speech and be able to follow the story. I had to find some quiet time when I could focus on the story more than anything else.
One thing I would have liked to have seen differently is a longer pause when switching between view points.

Rating and Recommendation: I’m giving Within the Veil 5 stars and recommend it to those who enjoy Christian Historical Fiction, a clean Gypsy story, or a Scottish setting.

~ I received a copy from the author. All thoughts are my own. I was not compensated for this review.

And if you don’t listen to audio books, fear not! Within the Veil is available in paperback and e-book form! Enjoy!

*Note for those following the blog: I accidentally released this review before it was finished. My apologies!!