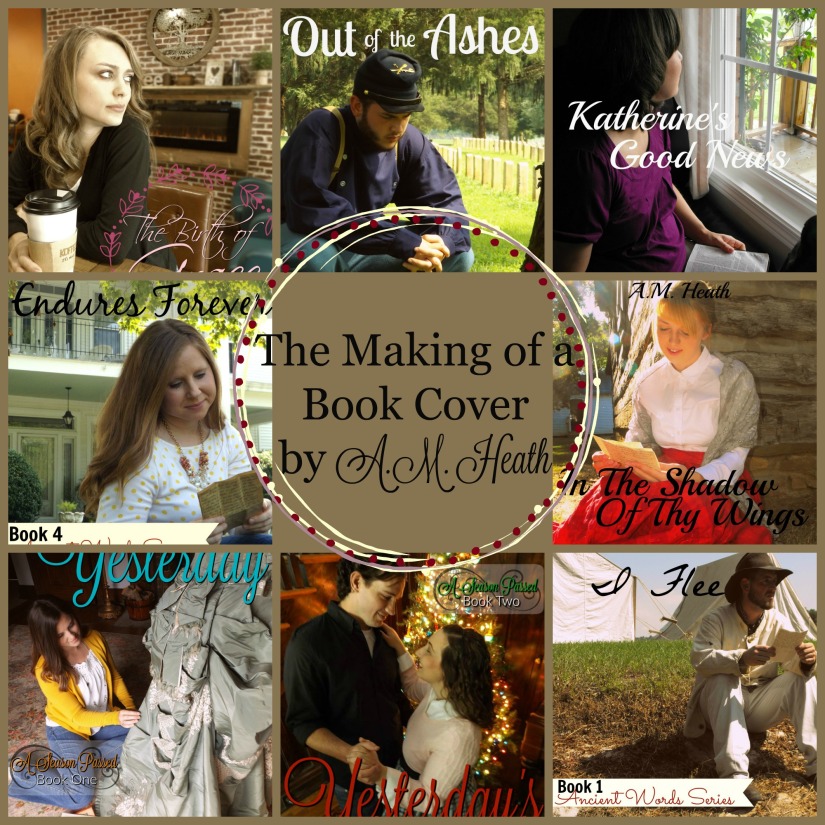 Last week, I shared with you the early prep work that goes into the cover. Today, I want to share some of the special moments during the photoshoots themselves.
While walking into the shoot knowing that I have to leave with one perfect picture can create a bit of nerves, I try to remind myself that I only need ONE shot. Here’s a glimpse at what happened that day . . . 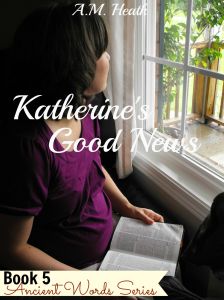 Katherine’s Good News:
Before I had published any book, I had planned to release KGN as a novella. It was meant to act as a prequel that would introduce readers to a brand new author. The rest of the series would come in behind it to fill in what happened before KGN. It may sound strange to publish them out of order but it would have worked . . . except that my critique team had seen something bigger for KGN and had challenged me to turn it into a full-sized novel, which I agreed to do. But at the time, KGN was to be my first published work and therefore was my first photoshoot.
Elizabeth Bowman sat for the cover as Katherine Bakeman. My only requirement was that I needed a pregnant model with brown hair and Elizabeth was perfect. We took the picture in her home and chatted about various things . . . including plastic flamingos. Lol To this day, I think of her when I see one.
Her husband Tyler Bowman walked in while we were working and offered to help me with anything else I needed. Little did he know that I had him on my list for models for Frank Harper. I took him up on that offer on the spot!!
Lesser known fact: Elizabeth has never taken off her wedding ring since the day of her wedding. Since the character is pregnant out of wedlock, we hid the ring in each of the poses. 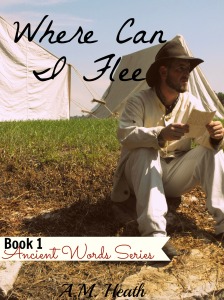 Where Can I Flee:
As mentioned, Tyler Bowman sat for Frank Harper. We chose a day in Aug, an extremely hot day in Aug I might add. I packed a picnic lunch and met Tyler and a local Civil War reenactor, Joseph Byrd,  on a Saturday morning. The fellas set up two tents for my backdrop and took them down after the shoot.
The letter on the cover was fictionally written by Frank’s sister, Claire. But the handwriting belongs to Christina Gragg.
Memorable Moment: At the end of the shoot, I sat down on the ground and thumbed through some pictures when I felt something on my leg. I looked down and had this gigantic spider crawling on my leg. Needless to say, I screamed and jumped up – or I tried to. My legs were weak from squatting and standing over the past two hours that as soon as I jumped up, I collapsed. Lol But I couldn’t let that spider get me so I crawled away as best as I could. LOL I was a bit embarrassed once things settled down. But if it happened again, I would have done the same thing. 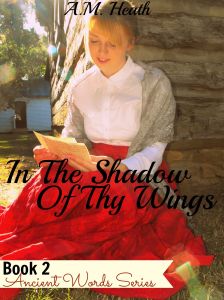 In the Shadow of Thy Wings:
Taylor Adcock sat for the character Sally Chandler. We had an early morning photoshoot since Taylor was newly engaged at the time and had a second photoshoot scheduled for that same afternoon for her engagement photos. We mostly had the area to ourselves that morning which is always helpful in a public area.
The letter on the cover was fictionally written by Frank Harper, but the handwriting belongs to Steve Flippo.
Lesser Known Fact: In preparation for her engagement photos, Taylor’s fingernails were SUPER red and had to photoshopped for the cover. 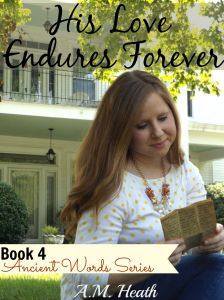 His Love Endures Forever:
Tiffany Hutchings sat on the cover for Allie Redman. This was my first time working with the Potts on Valley Home Farm but if you’ve read my post last week you’d already know that it wasn’t my last. In this cover, Allie is meant to be reading a letter written during the Civil War so not only did we create a letter but we had to age this one as well. The letter was fictionally written by Sally Chandler while the handwriting belongs to Sherry Williams.
Memorable Moment: Tiffany was under attack by bees almost the entire time. It doesn’t show in the picture but she was dodging them in between shots! 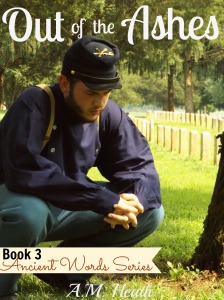 Out of the Ashes:
Zach Cartwright sat on the cover for Ralph Williams. We borrowed the uniform from a Cavalry reenactor, Guy Hill. This was another one of those sweltering shoots. By the end, both of us were red-faced and sweating. Lol We didn’t have to dodge bees during this one but I did have to dodge cars and people. There is a busy road in front of the cemetery. Some of the shots were angled toward the road so I had to keep an eye on traffic and angle the camera so as to miss the poles and wires in the background.
Fun Fact: We borrowed a wide-brimmed hat to go along with the uniform since they were more popular among the cavalrymen but chose not to use it since it made Zach look Amish. Lol Nothing against the Amish look, but it would have been misleading as a cover image. 😉
Try to imagine the cover image with the different hat. It’s amazing how the smallest details can change an entire image. Another hat-related fun fact for you: I had Tyler try some relaxing poses with his hat resting beside him during Where Can I Flee’s cover shoot. But every time he took his hat off, he ceased to be Frank and became Tyler instead. I eventually got the hint and we left the hat one for the remainder of the photos. 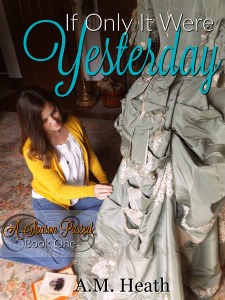 If Only It Were Yesterday:
Shelby Bramblett sat on the cover for Liz Cooke. Since I was offered a full tour of Valley Home during my first visit, I recalled seeing two dresses on display. So I knew where to look when I developed a cover that required an antique dress. In fact, the era in the novel was chosen specifically for the sake of using that dress.
While the Potts were overly generous, there was one major stipulation. We couldn’t touch the dress without gloves. Together, Shelby and I put gloves on and moved the dress, then stipped them off to take pictures, and put them back on to reposition the dress again.
Lesser Known Fact: Because we weren’t allowed to touch the dress, Shelby’s hand is actually hovering above it in the picture. 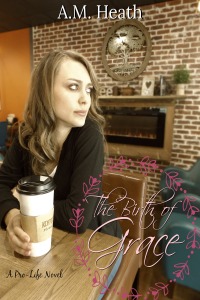 The Birth of Grace:
Veronica Bardoff sat for Kaitlin Jefferson. We met at the coffee shop that morning during the lull for pictures and, for the most part, had the place to ourselves. Just over Veronica’s shoulder on the far wall is an interesting picture of a frog. Lol I took several shots before I noticed him and afterward purposely angled him out of the shot. However, the tree in the background was a pleasant surprise. After the shoot, we sat down and enjoyed mochas and bagels.
Lesser Known Fact: Veronica’s daughter is playing on the floor during the entire photoshoot but you wouldn’t know that just by looking at the picture, would you? 😉 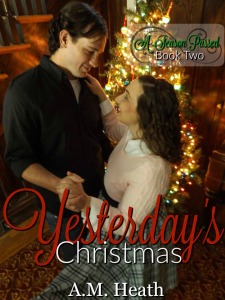 Yesterday’s Christmas:
In the fall of 2017, I set out to create these last three covers. Because there are so many factors to weave together to pull off any single shoot, I feel better about getting them done earlier rather than later. When I started the Ancient Words Series, I hadn’t expected to take a break in the publication so in order to pull off the next three releases, I needed three new covers. I knew up front that Yesterday’s Christmas was going to be the biggest challenge. But on the last Saturday in Oct, we set out to bring this image to life.
For the first time, I worked with a couple and I must say it was a wonderful experience. Real-life couple, Colt and Kayla Davis, sat for Betty and Glenn Tanner. These two played off of each other so well. The prep work was strenuous with this one. After searching the closets of our friends, we had Kayla’s skirt special made while the other items were easily collected. I used my own Christmas tree, some of my strands of lights, my mother’s ornaments, borrowed strands of bubble lights which were hugely popular in the 1950s, and bought a .99 pack of tinsel. Also for the first time, I worked with an assistant. Darla Damron tagged along to help me set up and take down the tree. She was a huge blessing, let me tell you!
Lesser Known Fact: We were working in a dim corner on a cloudy day, making the lighting a total nightmare. Majority of the pictures were trashed during my first viewing. But thanks to Amanda Tero and a little sharpening magic, we found an image that more than passed the test.

Join me next week and I’ll fill you in on what happens after the pictures are taken. AND for a special treat, I’ll share the runner-up covers and fill you in on why each particular cover was selected over the other favorites.

7 thoughts on “The Making of a Book Cover: Part 2: The Photoshoot”