One of my reading goals for 2018 is to cover more ground on the backlist. So many of my favorite authors have several previously published books that I haven’t had time for. I’m hoping to change that this year.

I decided to try something a little different. Instead of multiple posts, I’m going to collect the backlist titles and review them all at once. So here we go! These are the titles I read in January. I’ve had the pleasure of listening to all three books in audio as well and will rate the audio version.
*All links will take you to Goodreads. 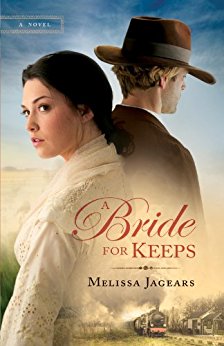 A Bride for Keeps by Melissa Jagears:
Everett Cline will never humiliate himself by seeking a mail-order bride. Not again. He’s already been jilted by three mail-order brides and figures a wife just isn’t in his future. However, a well-meaning neighbor hasn’t given up on seeing him settled, so she goes behind his back to bring yet another woman to town for him.

Julia Lockwood has never been anything more than a pretty pawn for her father or a business acquisition for her former fiance. A mail-order marriage in faraway Kansas is a last resort, but she’ll do anything to leave her life in Massachusetts and the heartbreak she’s experienced there.

Although Everett doesn’t see how a beautiful, cultured woman like Julia could be happy sharing his simple life, he could really use a helpmate on his homestead. Determined to prove she’s more than just a pretty face, Julia agrees to a marriage in name only. Faced with the harsh realities of life on the prairie and hesitant to explore the tentative feelings growing between them, can Everett and Julia ever let each other in long enough to fall in love?

My Review: I’ve always wanted to come back to this series and I’m glad I finally did. This was a classic mail-order bride story. I enjoyed it and look forward to finishing the series.
I thought Jagears did a lovely job with the gospel presentation throughout the novel.
Rating: 4 stars
Audio Version: 4 out of 5 stars. 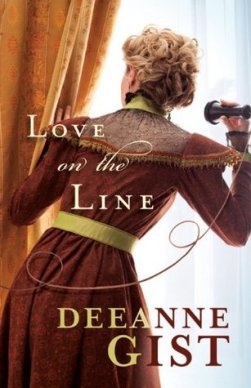 Love on the Line by Deanne Gist:
In 1904 Texas Ranger Luke Palmer arrives in Brenham, Texas, with one goal–to capture the gang of outlaws led by Frank Comer. Undercover as a telephone repairman, he uses his days on the range to search, not realizing there’s another pair of eyes watching him.

Georgie Gail, switchboard operator and birder, heads out on a birding expedition, but instead of sighting a painted bunting, her opera glasses capture her telephone man, armed and far away from telephone lines. Palmer is forced to take this alluring troublemaker into his confidence and unwittingly puts her in harm’s way. The closer he comes to the gang, the further she works her way into his heart–and into trouble. Soon it’s more than just love that’s on the line.

My Review: From page one, I was hooked and couldn’t put this one down!! I loved the mystery and I especially loved the ending. There was comedy, romance, tension,  and plot twists all rolled into the climax. It was great! The romance was really pretty clean, however, the characters tended to view each other in a lustful mindset most of the time. It’s not my preference, so I’ll just leave that note there for anyone who might appreciate the heads up. The kissing scenes didn’t go far at all, though.
Rating: 5 stars
Audio Version: 5 stars 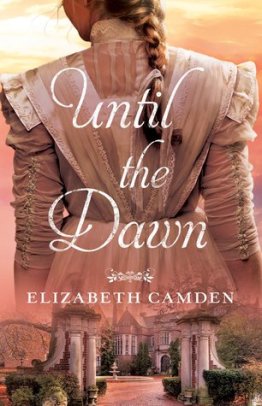 Until the Dawn by Elizabeth Camden: A volunteer for the newly established Weather Bureau, Sophie van Riijn needs access to the highest spot in her village to report the most accurate readings. Fascinated by Dierenpark, an abandoned mansion high atop a windswept cliff in the Hudson River Valley, Sophie knows no better option despite a lack of permission from the absent owners.

The first Vandermark to return to the area in sixty years, Quentin intends to put an end to the shadowy rumors about the property that has brought nothing but trouble upon his family. Ready to tear down the mansion, he is furious to discover a local woman has been trespassing on his land.

Instantly at odds, Quentin and Sophie find common ground when she is the only one who can reach his troubled son. There’s a light within Sophie that Quentin has never known, and a small spark of the hope that left him years ago begins to grow. But when the secrets of Dierenpark and the Vandermark family history are no longer content to stay in the past, will tragedy triumph or can their tenuous hope prevail?

My Review: I LOVED THIS BOOK! The family mystery was interesting, and so was the history of the Weather Bureau. But my favorite was the characters themselves. I can’t help but love the Grinch and Scrooge. I suppose there’s something about watching the cold and hateful grow warm and loving. I thoroughly enjoyed how Quentin and Sophie’s personalities played off of each other. And Sophie was a beautiful example of how a Christian ought to treat others. I would have liked for Camden to have been more clear about our worth being found in Christ and our worthiness/goodness being HIS imparted righteousness and the power of the Holy Spirit. Because Quentin starts out as an atheist there was a strong and sturdy thread about faith throughout the entire novel. I appreciated her work here, but it often felt like she started and stopped at God’s role in creation. There was room for her to be a bit more clear in Jesus’s role in our salvation and the Spirit’s role in sanctification.
Rating: 5 stars
Audio Version: 5 stars

Have you read any of these yet? Will you be adding any to your TBR list?