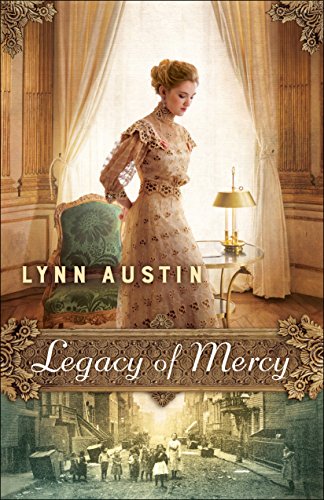 Having returned to Chicago, young socialite Anna Nicholson can’t seem to focus on her upcoming marriage. The new information she’s learned about her birth mother continues to pull at her, and she hires Pinkerton detectives to help her find the truth. But as she meets people who once knew her mother and hears stories about the past, Anna soon discovers that some secrets are better left hidden.

At the same time, unflattering stories about Anna are leaked by someone who would love to see her disgraced and her engagement broken. And as Anna tries to share her faith with her society friends, she understands that her choice to seek God’s purpose for her life isn’t as simple as she had hoped.

When things are at their darkest, Anna knows she can turn to her grandmother, Geesje de Jonge, back in Holland, Michigan. Geesje’s been helping new Dutch immigrants, including a teen with a haunted past, adjust to America. She only hopes that her wisdom can help all these young people through the turmoil they face.

What I Loved: If you’ve read Waves of Mercy, you might have felt like there was more to the story. I’ll be honest with you, I was one of those rare human beings that was actually completely satisfied with the ending as it was. But that doesn’t mean, I wasn’t thrilled to get my hands on the “new ending!” And, boy, was it worth it! This was even better than the first one!
What Austin does so well, is that she brings a historical setting to life with well-developed characters and a rich spiritual message. Legacy of Mercy was a powerful story on dealing with grief and forgiveness. The story picks up right where Waves of Mercy leaves off and brings over the same lessons we were learning in the first novel and re-emphasizes their importance and adds to them in a beautiful way. I’ve read some continuations that felt like an extended epilogue but this was not that sort of novel at all! It was a fantastic ride that didn’t end until the very last chapter.

Rating and Recommendations: I give Legacy of Mercy 5 full stars and recommend it to those who enjoy historical Christian fiction. While it’s possible to read the books out of order and understand them, you’d appreciate Legacy of Mercy more if you read them in order.

~ I received a copy from Bethany House. I was not compensated for this review or required to give a favorable one.

It’s always a treat to hear from the author and to listen in as they describe the details of their novel in their own words. Please, enjoy this interview:

1. Legacy of Mercy will be released on October 2 and will be the first sequel you’ve ever written. What made you decide to write a sequel?

My readers decided for me! I received many, many letters from them asking if there would be a sequel to “Waves of Mercy.” The main character, Anna, is only in her twenties and is a new Christian, so when she decides to return to Chicago and marry her fiancé at the end of the book, readers wanted to know what happens next in her life. The more I thought about it, the more I wanted to explore what happens next for Anna, too. She has just discovered who her birth mother is, so naturally she’ll want to learn more about her. She’ll also want to solve the mystery of who her real father is and what became of him. What if he is still alive? Lots of material for a story here, especially when the other people in Anna’s life try to discourage her investigations.

2. This story is set in your hometown of Holland, MI. Did you discover anything surprising while you were researching these books?

I knew very little about the early history of Holland, Michigan when I began this series—only that it was settled by Dutch immigrants. What surprised me was how much they suffered to establish a settlement here, including religious persecution, a malaria plague, and a devastating fire. Their enduring faith in spite of all their many trials was a huge inspiration to me.

3. The city of Holland must have seen an increase in tourism since you started writing about it. You even did a bus tour, tell us about it.

The book seems to have sparked a renewed interest in local history. The Holland tourist bureau told me they’ve guided several happy tourists to the places described in my book. And I was very pleasantly surprised by the interest in my “Waves of Mercy” bus tour! When I offered to guide interested readers to some of the settings from my book, I never imagined there would be enough interest to fill two chartered busses! There may even be another tour after “Legacy of Mercy” releases.

4. You are known for writing multi-generational books and Legacy of Mercy is no exception. What intrigues you about writing in this style?

I enjoy creating women’s personalities from various eras and exploring how the roles and opportunities changed for women from generation to generation. I find it very interesting to see how the choices one generation makes has an influence on each generation after them. It causes me to be more thoughtful in the way I live, knowing that my children, grandchildren and even great-grandchildren may be impacted by my life.

5. Which character in Legacy of Mercy do you identify with the most and why?

I would have to say I identify the most with Geesje DeJonge. For one thing, she is about the same age as I am, and has lived long enough to be able to look back through the years and analyze them. She is in a position to see all of the ways and times when God carried her through—something we usually only see in hindsight, not when we’re going through the difficulties. I’m at the same stage in my life, and I can see God’s faithfulness to me in spite of the many times I questioned His wisdom.

6. When you sit down to write a story, do you know how it is going to end? Describe your writing process. How do you stay disciplined and not get distracted?

I never know how a story will end when I start writing. I rarely even know what comes next when I’m writing a chapter! I begin with the historical setting, and as I’m doing my research, my characters usually begin to take shape in my mind. I flesh them out by developing resumes for them so that they become real people in my mind, with backgrounds and personalities. Then I figure out where to begin the novel and simply make up the plot as I go along. If I’m surprised then the reader will be surprised.

My deadline keeps me disciplined. I know that if I write a certain number of pages a day, I’ll finish the book on time. I also know how very hard it is to write well when I’m behind schedule and a deadline is looming. Wanting to avoid that last minute panic keeps me disciplined on a daily basis.

As for distractions—there are so many! Over the years, I’ve had to learn when to put the book aside and enjoy a pleasant distraction (an old friend who has come to town, an afternoon with my husband), and when there’s no value in the distraction and it will only make the writing process harder.

7. Did anything surprise you about the Legacy of Mercy story?

Also, the ending surprised me—a lot! I hope that all of my readers who asked for a sequel are pleased with it.