The best historical novels bring a portion of reality to the story. “Where Can I Flee” may be a work of fiction, but there are several details based on reality. At the end of the novel, I included a “Fact and Fiction” section where I share just how much of the story was based on fact verses fiction. I’m not going to relist everything today but I do want to share some special pictures from two real battle fields including one that wasn’t mentioned in the Fact and Fiction section of the novel.

As mentioned, each of the battles that Frank participated in are real. The 17th Regiment of Tennessee Infantry were active at Rock Castle, Fishing Creek, they were on the reserves list at Shiloh, and active in Perryville and Stones River.

For those that have read, “Where Can I Flee,” will not soon forget the battle of Perryville. Frank and his regiment shifted positions and soon found themselves forming lines in front of a home.  You can see, in the picture to the left, the 17th in red. That’s our friend, Frank Harper. 🙂 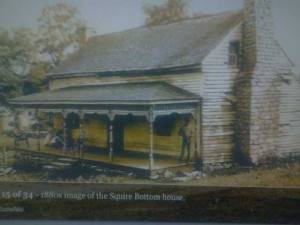 And here is a photo of the home known as “Squire Bottom.” The home survived the battle and this picture was taken about 20 years after the war.

The battle flag for the 17th.

What you may be surprised to learn, and what I failed to mention in the “Fact and Fiction” section, is that the skirmish on the Wilson farm was real. However my version was completely fictional. There isn’t a “Wilson Dairy Farm” in the real town of Wartrace, Tennessee. And the way I laid out the town, I position this skirmish on the other side of the tracks. But the skirmish was real and did happen between a group of cavalry men. Here’s a picture of the battle field today. It’s hard to imagine this once peaceful park held a darker past.

1 thought on “When Fiction Meets Reality”