This post was originally posted in March 2015, but we’re bringing back an old favorite so new fans can get to know this special family. Originally, this post was connected to a giveaway which is NO LONGER open. All other links are still valid. I hope you enjoy! 🙂

I’m celebrating the birthdays of fictional characters, Claire and Frank Harper, and what better way than to take a closer look at them. We’ll get to know two of my favorite people this week in this post and in a special interview on Wednesday. Let’s get started!

Claire and Frank are twins with brown hair and blue eyes. The lady on the right is a wonderful likeness of Claire, although, an official model was never chosen. The fella on the right, Tyler Bowman, poses for the cover and is, officially, Frank Harper.

They are the only children of Eliza and Olen Harper.

Olen is the middle son of Henry and Martha Harper. His oldest brother, Peter, died and youngest brother, Teddy, went west and was never heard from again. Little is known of his family. He grew up in Georgia.

Eliza is the only daughter of Lillian and Samuel Jackson. Raised on Cherokee Rose Plantation in Atlanta, Georgia. Eliza had two brothers: Samuel Jr. who died at the age of five and Fredrick who joins the Confederacy with his father.

Quote from Claire: “…for I never was, nor did I claim to be, a farmhand equal to you. But Father puts up with my assistance easily enough, and he is such a  patient man to do so. I laugh now as I remember his words to me last, “Claire, dear, please, allow me only a moment of silence. I can hardly think anymore with you working so hard beside me.” Working of the mouth, no doubt, is what he was thinking of, but he refrained from saying it. He made sure not to need any help for another full week after that…”

Briggs Personality: ESFP The Performer  People-oriented and fun-loving, they make things more fun for others by their enjoyment. Living for the moment, they love new experiences. Interested in serving others. Likely to be the center of attention in social situations. Well-developed common sense and practical ability. Claire is frail in body but bold in spirit.

Quote from Frank: “Oh, and the beans and salted pork they feed us each and every night is to die for! Or to die from!”

Briggs Personality: INFJ The Protector Quietly forceful, original, and sensitive. Tend to stick to things until they are done. Extremely intuitive about people, and concerned for their feelings.  Likely to be individualistic, rather than leading or following. Frank doesn’t shy away from doing his duty, no matter what that entails.

Handwriting: The handwriting for Claire and Frank is featured on the back cover of the novels. Here’s a close up of their signatures. 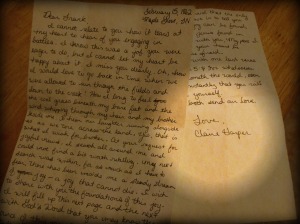 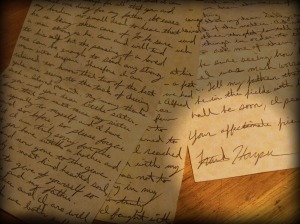