Well, let me tell you it wasn’t easy! Cover selecting is one of the most fun, yet most stressful, jobs. In case you missed it, you can view the cover options here and here.

Before we show off the new cover, let’s take one last look at the rest of the series: 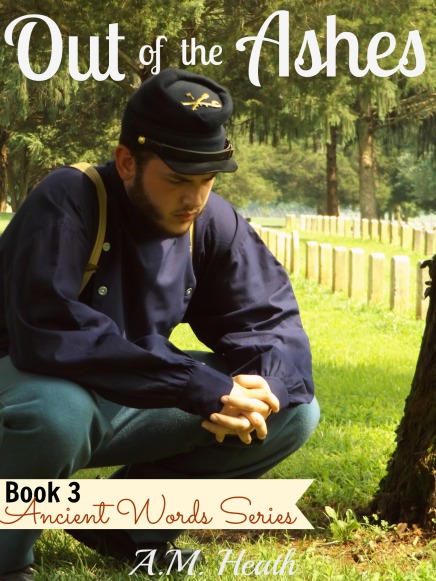 Now for a little mood music, push play and let’s talk about this series for a moment.

For those of you checking out the Ancient Words Series for the first time, you’re catching this series in its early stages. Where Can I Flee is on sale on Amazon in both ebook and paperback form. Paperback is also sold locally. Where Can I Flee introduces us to the Harper family at the start of the Civil War.
In the Shadow of Thy Wings is due to release this fall and will continue the story of the Harpers’ experiences during the last two years of war.
Lord willing, Out of the Ashes will follow in fall of 2016. The only thing I’m able to share publicly at this time is that Out of the Ashes will follow three war-weary soldiers as they find their place in a destroyed South. Completely, by Among the Thirsty, has become the theme song for the novel. It captures the brokenness and surrender that each man will have to face as their personal story unfolds. I know you’re going to love it, and I look forward to sharing it with you. Now that I’ve seen the cover, every part of me aches to begin writing this story. The opening scene is written, but that’s as far as I’ve gotten. Whether I like it or not, Out of the Ashes must rest while I focus on my summer editing chores for this year’s release.

And speaking of this year’s release, are you ready to hear more about the anticipated sequel? The most common thing I hear from readers after they finish Where Can I Flee is WHEN CAN I GET MY HANDS ON THE NEXT ONE? 🙂 That’s music to this author’s ears!! But truly, I’m just as eager to hand it to you as you are to read it! Next week, I’m releasing the official blurb for In the Shadow of Thy Wings. You’ll find it right here on the blog first so I hope you’ll join me!

You can learn more about the Ancient Words Series here.

2 thoughts on “Cover Reveal: Out of the Ashes”