I’m excited to FINALLY share the blurb for my next novel! I don’t have a release date set yet because we’re all still hard at work over here, but we’re on track for a Fall release.

Devastation sweeps across the land, and the families of Maple Grove cannot escape when war arrives at their front doors. After her father entrusts her with a new and dangerous task, Sally Chandler must find the courage to obey despite her fear. Meanwhile, her best friend, Claire Harper, is determined to serve others, even if it means putting herself in danger. But with a certain handsome Union soldier stationed nearby, Claire finds her heart in danger of falling for the enemy. Their differing loyalties create complications that neither could expect; her twin brother fighting for the Confederacy is only one of them. Frank Harper left home with one goal in mind – to become a prosperous plantation owner. Two years later, not only is he further from his goal, but he’s beginning to question his own desires–something that becomes more complicated when his heart becomes involved. The families of Maple Grove must learn how to survive the uncertainty of war and a country split in two. While the war in the nation rages on, the battle within grows stronger. Will they learn that the only safe place to hide is in the shadow of Thy Wings?

*The Ancient Words Series is best read in order. Please look for book 1, Where Can I Flee.

Central Verse: Psalm 57:1 “Be merciful unto me, O God, be merciful unto me: for my soul trusteth in Thee: yea in the shadow of Thy wings will I make my refuge, until these calamities be overpast.” KJV 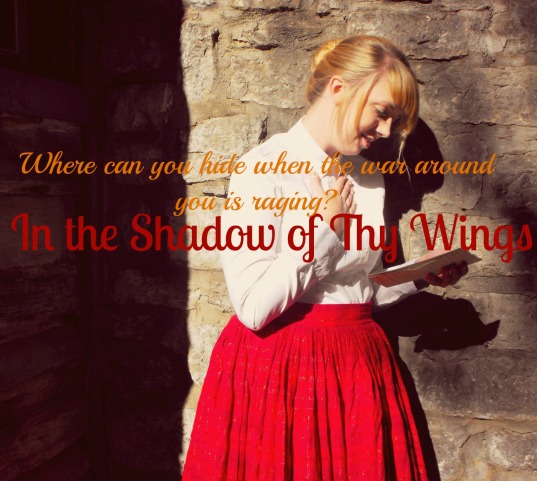 *A great big thank you to Alicia Ruggieri, Dana Kamstra, and Rachel Swander who worked tirelessly with me as I wrote and rewrote the blurb. I’d be bald today if you hadn’t stepped up and helped me out. Lol Thanks again!!!