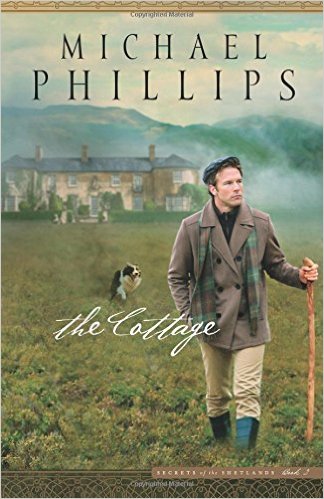 When Loni Ford is informed that she has inherited property in the Shetland Islands, she laughs. She wants nothing more than to sell it and be done with it. But when she arrives in the North Sea enclave, she is stunned to find that “the Cottage” is not at all what she expected, nor is David Tulloch, the man most of the islanders believe to be the rightful heir.

The locals could hardly be more surprised that the heir is a woman–and an American. Loni, in turn, finds the islanders quaint and a bit behind the times. Expecting David to be as provincial as the rest of his clan, she discovers that there is far more to the man than meets the eye. And there is something about the peaceful atmosphere of the place–and the character of its most prominent citizen–that soon gets under her skin.

Beneath the peaceful surface, however, change is threatening the island of Whale’s Reef. David’s cousin Hardy Tulloch, whose claim to the inheritance now in Loni’s hands was backed by oil investors, has not been deterred in his aim to control the island. But his co-conspirators have plans of their own, plans that put Loni’s very life in danger.

What I Loved: The setting really came to life in this book. I felt like I was actually there, visiting this small Shetland Island. Everything from the descriptions to the characters’ speech and down to their constant offer of tea sent me on a journey every time I picked up the book. The setting truly was the star here.
Phillips not only created a well developed setting, but he also crafted an in-depth family saga, cloaked in mystery and spanning several generations. The Cottage is book 2 of the series. While I was able to fill in the blanks and follow the story without having read book 1, I would highly recommend any interested reader to read this series in order. The book and its mysteries started off very strong, but sadly it didn’t end strong for me.
At the point where the romance begins to take center stage, it didn’t. The drama on the island remained in high gear but for this romance reader it wasn’t enough to keep the entire story from fizzling out. Loni and David just didn’t show any emotion toward one another. They had feelings about several issues throughout the book but when it came each other, they might as well have been siblings.
Another concern of mine was the amount of Quaker beliefs being taught here as well as David’s spiritual beliefs. I don’t want to argue doctrine in a review and I’ll have to be honest and tell you up front that at 3/4 of the way in, I had started skimming because I had grown bored so I can’t say for certain whether or not things in the religious department worked themselves out, but from all that I read it didn’t appear to. I only want to mention it so that each reader can make the decision that is best for them. My problem is that the characters were seeking God and the focus seemed to be outside of “faith alone through Christ alone” as found in the Scriptures alone and it never settled well with me. There may have been a line somewhere that balanced it out but I didn’t read it or see any indication that it would in all that I had read. Simply put, the message just sounded off to me.

~I received free a copy from Bethany House. All thoughts are my own. I was not compensated for this review or required to give a favorable one.

*For those who may be concerned about the credibility of my complaint over a book that I wasn’t able to fully finish, I want to put your mind at ease. The rating I gave this book, I gave solely on the book’s other merits and not on the questionable religious content. I don’t feel that I can properly reduce the rating based on an area of the book that I’m 90% instead of 100% sure of. So why did I mention it at all in my review? Simply because I felt it my Christian duty to point out something that I wasn’t comfortable with for the sake of like-minded readers who may have appreciated the warning. I stand by my comments shared in this review. After 11 years of faithful study, the teaching in this book simply sounded foreign and I wasn’t comfortable. Each reader will have to make their own decisions. I hope I brought you an honest review that will help you in deciding.

2 thoughts on “Book Review: The Cottage by Michael Phillips”