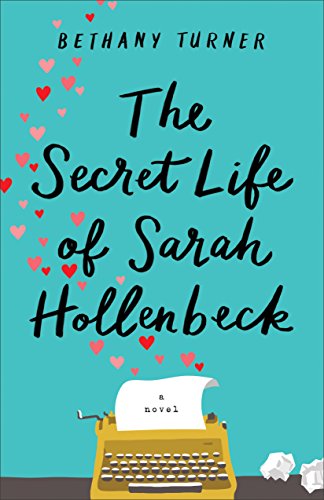 Becoming a Christian is the best and worst thing that has ever happened to Sarah Hollenbeck. Best because, well, that’s obvious. Worst because, up to this point, she’s made her very comfortable living as a well-known, bestselling author of steamy romance novels that would leave the members of her new church blushing. Now Sarah is trying to reconcile her past with the future she’s chosen. She’s still under contract with her publisher and on the hook with her enormous fan base for the kind of book she’s not sure she can write anymore. She’s beginning to think that the church might frown on her tithing on royalties from a “scandalous” book. And the fact that she’s falling in love with her pastor doesn’t make things any easier.

My Thoughts: From the first page I was struck by Turner’s comedic voice and smooth story-telling tone. There were two factors that made this novel a memorable one: Turner nicely dealt with an often-debated topic among Christian fiction readers. And she incorporated a strong message on repentance, new life in Christ, and dealing with the consequences of previous sins. I really appreciated watching the character turn to Christ in a real-to-life moment of conversion then proceed to turn away from her previous lifestyle on a day-to-day basis. It’s the type of real Christian living that we don’t always see in fiction. A lot of fictional characters are either already saved at the start of the book or they’re saved at the end, so Turner was working in a different “setting” here, and I  enjoyed it. I will say, that there were times when I felt like the message started to feel unbalanced as if God cared more about getting these two together than anything else. While I would have appreciated seeing a little less “God did it in order for us to meet” tones, Turner knocked it out of the park in terms of repentance and living for Christ.
As a conservative reader, I want to point out that I feel that the book is best suited for a mature audience. However, I want to point out the difference I found here in Turner’s work compared to some other “mature” works I’ve read in the past. Turner allows her character to talk or think about sex in a very blunt, matter-of-fact way. I’ve read some novels that I felt were too steamy for my taste but  I don’t think this one falls into that category. The reason is that in other too-steamy-for-me novels the author describes things in a very detailed, slow, and lustful manner. Turner just said it. I don’t think I’ve read the word “sex” in a Christian novel as many times as I’ve read it in this one . . . and yet, it really didn’t come across as over the top to me. Fellow sensitive readers will have to take that into consideration and decide what they’ll do with it. For me, I found it surprising but I didn’t feel the need to put it down as I have others in the past.

Rating and Recommendation: I recommend this to those who enjoy Christian Contemporary or to those who are looking for something fresh in Christian Fiction. I’m giving it 4.5 stars.

~I received a copy from Revell through Net Galley. I was not compensated for my review. All thoughts are my own.