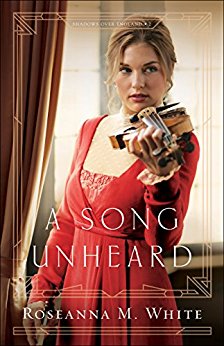 Willa Forsythe is both a violin prodigy and top-notch thief, which makes her the perfect choice for a crucial task at the outset of World War I–to steal a cypher from a famous violinist currently in Wales.

Lukas De Wilde has enjoyed the life of fame he’s won–until now, when being recognized nearly gets him killed. Everyone wants the key to his father’s work as a cryptologist. And Lukas fears that his mother and sister, who have vanished in the wake of the German invasion of Belgium, will pay the price. The only light he finds is meeting the intriguing Willa Forsythe.

But danger presses in from every side, and Willa knows what Lukas doesn’t–that she must betray him and find that cypher, or her own family will pay the price as surely as his has.

What I Loved: Sometimes book one of a series is so great that you almost have to expect some form of a let down in book two. This was NOT the case with A Song Unheard. White returned with the same loveable street-wise family and added to them another set of memorable, one-of-a-kind characters. One of my favorite characters, in particular, was Margot De Wilde. She seems to be autistic, although it wasn’t named. Either way, she had such a unique personality and gifting. I appreciated how White gave her, and other characters, such depth and yet it never felt like they slipped out of character.
The focus of the war was centered on the refugees and the homefront so there was little military focus. Homefront stories tend to be my favorite, so this was a treat for me.
I honestly loved every minute I spent in this book, and I can’t wait for the third in the series!

Rating and Recommendation: I’m giving A Song Unheard 5 stars and recommending it to Christian Historical Fans, musicians, and fans of WWI fiction.

~ I received a copy from Bethany House. All thoughts are my own. I was not compensated for this review.