I’m thrilled to take part in this three-month tour! I have watched my little writing sister, Amanda Tero, toiling over this series for years now. It has been such a delight to see this idea grow from one book, to two, and then to three. In celebration of her upcoming release, Amanda is taking us on an extended tour and revisiting the entire series.

Today, we’re featuring Befriending the Beast, book 1 of Tales of Faith. You can check out my review of the novella. There’s also a bonus interview in the old post!

Keep reading for a sneak peek at the novella …

Birds whistled pleasantly around her, chasing each other through the various trees and bushes as if trying to convince Belle that somber life lived only inside of the castle. The gentle splashing of the fountain and distant sound of the horses from the stables joined in the harmony of the birds’ music; the songs of the castle grounds that Belle loved.

Today, the songs only served to bring Belle back. Back to a time when they were a happy family. When Mama had planned her rose garden, inviting Belle to select her favorite roses to embellish the plot. When deer had threatened the garden, Papa ordered walls to be built around it, creating what he called their secret garden. Many times, it was just Belle and Mama inside, leaving the world with its cares and sorrows shut out.

A burning desire for this serenity overtook Belle, and she rushed around the walls until she reached the gate. Vines wove in and out of the intricate ironwork, creating a shield that blocked Belle’s view of the flowers inside. She reached for the latch. A lock was rusted onto it. The garden had never been locked before. Pulling at the vines, she created a hole big enough to peek inside. Her heart, which had quickened in pace, now seemed to skip a beat. Only a few tall canes stood bravely amidst the tangle of weeds, the stems dropping with the remainders of flowers that had bloomed, dried up, and died. The paths and garden beds were hidden by brambles, nothing like the paradise she remembered.

Footsteps sounded behind Belle and she spun around, schooling her face to be calm. A stranger stood in front of her.

“You must be the gardener,” Belle guessed. It certainly was not Olli.

The older man before her gave a low bow. “Aye, your highness. Carpus, at your service.”

“Carpus.” Belle turned and fingered the lock. “Is there a key to this gate?”

A look of alarm crossed Carpus’ face then disappeared. “It has been locked since before I was here, your highness.” 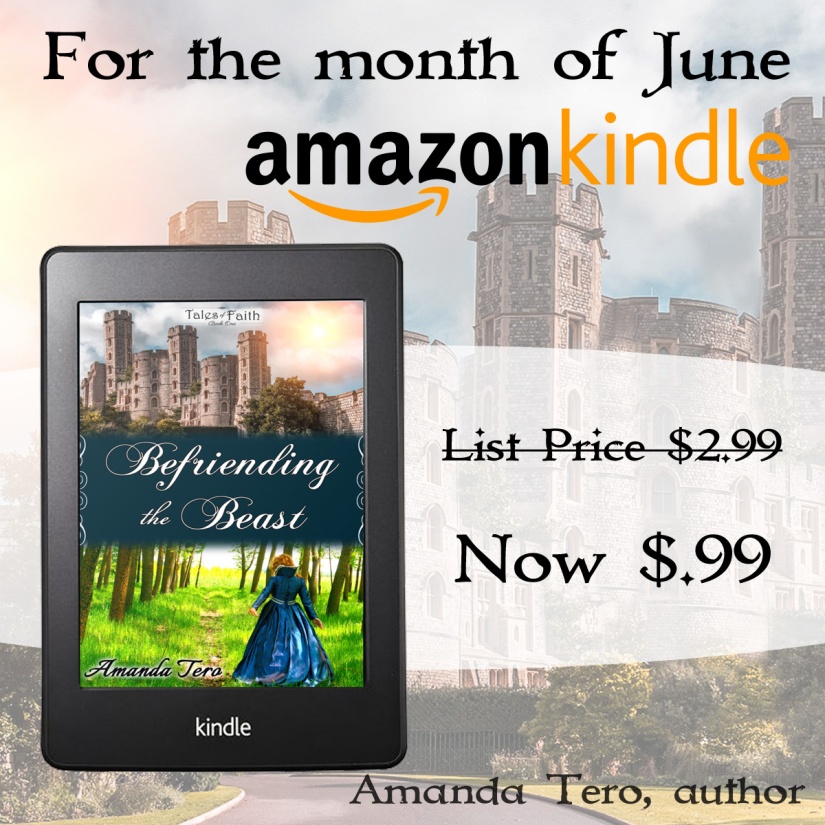 In anticipation of the release of “Protecting the Poor” (book three in the Tales of Faith series), Amanda is guest posting or being featured on over a dozen blogs each month. Each post is unique to the blog—an inspirational post, an article on the writing craft, an excerpt from one of the Tales of Faith books… you’ll just have to visit each blog to see what comes up. 😉 Amanda will link to each blog on With a Joyful Noise, so check in every week and see what blogs have a special Tales of Faith feature!

Amanda Tero began her love for words at a young age—reading anything she could get her hands on and penning short stories as young as age eight. Since graduation, she has honed her writing skills by dedicated practice and study of the writing craft. She began her journey of publication with a few short stories that she had written for her sisters and continued to add to her collection with other short stories, novellas, and novels. It is her utmost desire to write that which not only pleases her Lord and Savior, but also draws the reader into a deeper relationship with Jesus Christ.